It’s been a long time coming. An idea that took years to be realised, and a grand opening hosted by Slipstreamers that will not soon be forgotten. On the 14th May 2016, the enlarged apron and links roads that now extend the Hilliingdon Cycle Circuit were formally opened by the new Hillingdon Mayor, John Hensley, accompanied by his wife Mayoress Diane Hensley, on his first official engagement in office!

It was certainly a busy morning, with our Volunteers – as usual – pulling together to ensure success. However, it was our Young Volunteers who shone brightest – Zoe, Ella and Anastasia welcomed our ViP guests and led the tour around the circuit; Callum took some wonderful photographs to commemorate the visit; Morgan did some filming and produced a fantastic video; and Nathan helped get everything organised and set everything up. We couldn’t be prouder. A Few Words from Our Club Chairman, Alison Grant… This event was organised by Hillingdon Slipstreamers on behalf of the Users’ Group, which is the volunteer group that runs the circuit and clubhouse, to thank Hillingdon Council and British Cycling for co-funding the enlarged apron and link roads. The original idea for this came from our past president and head coach Brian Wright many years ago. Brian would have been thrilled with the result and how this will help coach the children in the future. He would also have been very proud and delighted at how well our Young Volunteers helped on the day to make the event such a success. I know I certainly was, and all the visitors have since commented at how impressed they were with them all. Not only did the three girls impress explaining so confidently about the work we do; but also the resulting photo’s and video from our creative Young Volunteers were of a professional standard (in my biased opinion).

As well as the Mayor and Mayoress, there was also Councillor Burrows, who is the Hillingdon Cabinet Member for Planning, Transportation and Recycling; and also Mr Tilly who is Head of Planning. British Cycling were represented by Josie Heffernan, our Regional Development Manager, and Graham MacNamee, Central Development Coach. It was wonderful to be able to show them all Slipstreamers at our very best. Every single Member and Volunteer played their part wonderfully and it was a very proud time to introduce the dignitaries to some of the many who make this club run so successfully; and indeed for them to see the club running as a normal Saturday session and all the variety of cycling we offer every child. Well done Slipstreamers! Callum Loveless, U16, is passionate about photography, and once he had finished helping the Admin Team with sign on, spent the rest of the morning taking some fantastic photos of our guests. Many of Callum’s snaps are featured in our album collection of the visit – hover over the image below to scroll through or click to be taken to the Flickr site. 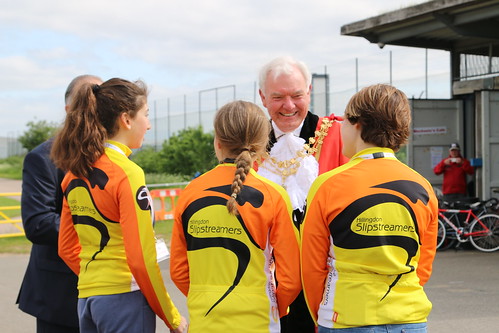 Morgan Evan, U16, has a passion for all things media. Armed with a film camera and tripod, he filmed key moments of the ViP visit, including the formal opening, as well as some excellent footage of the new apron and link roads in use by Slipstreamers. The video was produced entirely by Morgan in one afternoon, and needless to say, were are immensely proud of what he has delivered in the final cut. Recently, new link roads were made on the circuit to develop more skills for cyclists. To make the roads official, the Mayor of Hillingdon came to open them and look around the club. My cyclist friends and I were given the privilege to represent the club by greeting him and show them around.

First meeting him, we were quite shaky from anxiety when we addressed him. However, after some time of being together we were soon to realise that he was a kind and friendly man. He liked the idea that there was fun as well as hard work in the sessions, encouraging more young people to keep doing cycling.

After explaining about a few cycling techniques, e.g. ‘Chain Gang’, and their importance for energy conservation, the Mayor expressed his enthusiasm about the intricate detail of the sport. It was swelling to know that the Mayor enjoyed our ways of training. I felt very proud talking about my beloved club.

Afterwards, we made our way towards the link roads that were to be opened. Crowded around it were many cyclists with proud smiles upon their faces, many of which were buzzing to get moving again. The Mayor gave a compassionate speech supporting the love of sport and friendship in Slipstreamers and telling us to keep pursuing our dreams.

The highlight of my day was personally talking to the Mayor about how much the club means to everyone; pointing out that it isn’t just a sport club, but a place that can bring people together through a sport.

By Ella Coleman, U14 On Saturday the 14th of May the Mayor of Hillingdon came to visit our circuit. I, alongside Anastasia and Zoe, were privileged to even be asked to meet the Mayor, let alone give him a tour around the site.

We began by greeting the Mayor at his car. We were all told that he was very friendly and did not bite, but we were still very nervous as we were representing the club. When the Mayor stepped out of his car with his wife we were all taken back at the robe he was wearing and the large gold chains round both of the Mayor and the Mayoress’s neck.

Our tour began at the mechanic’s hut. However there were no bacon rolls cooking today. We moved onto the mountain bike area and the British cycling tent. We finally ended up at the link roads. We had a problem…

The ribbon was not long enough to go across the whole track so we, as cyclists improvised. We ended up using caution tape! After the tape was cut and a few more pictures taken we all went back to the club house for a cup of tea. We were all very pleased with the way the day went. I personally was proud that we helped make such a good impression of the club.

Before, the Mayor arrived, I was really nervous as I haven’t met any posh people before! However, he was really nice and genuinely interested in what the club does. It was fun getting to show him and the other VIPs around with Ella and Anastasia, and the link roads are really cool and I enjoyed riding them. Unfortunately I got a bit cold but I don’t think the Mayor would have done under his massive red robes and gold chain!! Once again, thank you to ALL our Volunteers for taking the time to ensure a successful visit for our guests. And thank you Young Volunteers for your fantastic reports – visual and written – that are an excellent and worthy memento of the day.

For more reports from the various events and activities as written by our Members, do click on over to the Slipstreamers in Action section of our News Hub and enjoy!