Hillingdon Mayor’s Sports Awards Coach of the Year 2014: And the Winner Is…

At an award ceremony in Hillingdon on the 28th January, the Mayor of Hillingdon presented awards to sporting individuals who have excelled at their chosen sport or made a real difference to a local club or team in the London Borough of Hillingdon – click here to find out more. Head Coach Dave George was nominated by the club to receive this award, a previous recipient being Ralph Passey (visit our Volunteer Roll of Honour to find out more).

Here is some of what our Club Chair, Alison Grant, had say about Dave when he was nominated:

“Dave is a level 3 coach and has gone from strength to strength. He had a difficult task, following the passing of our much loved founder and President, Brian Wright in 2012. However he has taken on the role of head coach fantastically and has won the respect of youth riders, volunteers and coaches alike. In a short period of time he has become Slipstreamer’s guru in all things cycling coach related and has taken the club to greater heights. He liases with all the regional and national coaches at British Cycling, attends numerous meetings, keeps up with all the latest material from our governing body and steers the children towards their individual goals at whatever level they are striving for. His enthusiasm is endless and always has time for every member of the club. He is the first one to arrive at “ The Mothership” as he refers to the clubhouse and circuit, every Saturday. He co-ordinates the early bird session at 8am and then continues into the main session at 9am through to 12.30pm. He has organised all of the club championships and their constituent parts, has judged numerous races throughout the year, often midweek after work and has acted as chief judge at our round of the National event we hosted this year.

Dave helps all Slipstreamers as individuals, should they wish to do so, working out each of their cycling pathways. As a consequence Slipstreamers have had some amazing results with wins at regional and national level this year. We now have 10 places on offer at the RSR’s ( Regional School of Racing) which is unprecedented. It has culminated in 3 Slipstreamers being offered ODA ( Olympic Development Apprentice). Dave should take great pride in his achievements as this is a first for the club to have three members simultaneously in what is in effect the GB squad for under 16’s. It has happened under his leadership as Head Coach. He is an inspiration to all of us and always has a smile on his face, nothing phases him. Truly a wonderful coach.” 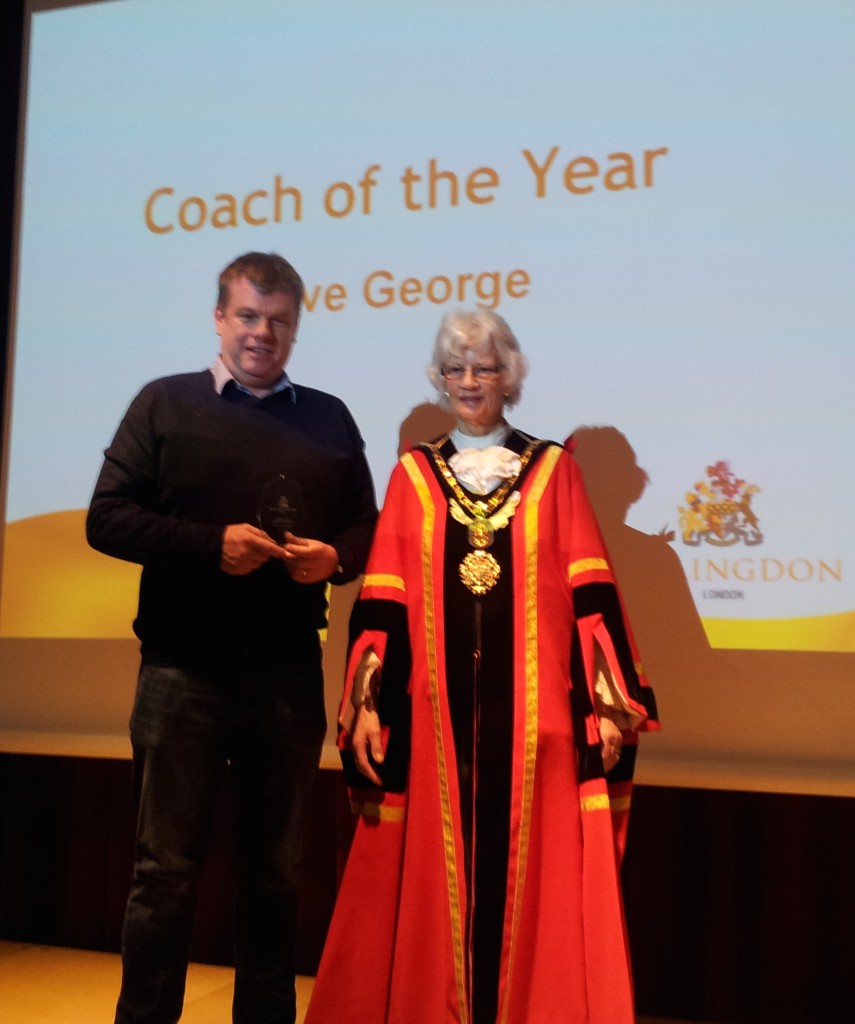 And without further ado, a few words from our Coach of the Year, Dave:

“I’d received the invite, and thought I’d go along to see what it was about. I didn’t know why I’d been invited other than perhaps Slipstreamers were in the mix to win something. I was clueless – didn’t know the format, the awards, where it was – even had trouble finding Uxbridge without using the M25! I was quite happy to be there, plate of samosas, and enjoying the evening watching Hillingdon Borough celebrate youth sporting success in a superb way. I was also very impressed with the array of sports clubs being celebrated – and the depth and width of opportunity that exists within Hillingdon. I was merrily watching and listening when the citation was read out for Coach of the Year and my first thought was “that coaching environment sounds like ours” which quickly turned to “Oh blimey! That IS Slipstreamers”.

Everyone loves to receive awards – and I’m no exception – but whenever I bring home “something else to clean”, I’m extremely grateful to have such opportunities within such an amazing group of people contributing to an incredibly rich and exciting environment that makes Slipstreamers what it is.

Now I know the format, and the prizes that are available – let’s get prepared to make an impact at this year’s London Youth Games!”

Well done Dave! We are all super proud of you!

For the full list of award winners go here.