An Epic Adventure Begins At 69…. 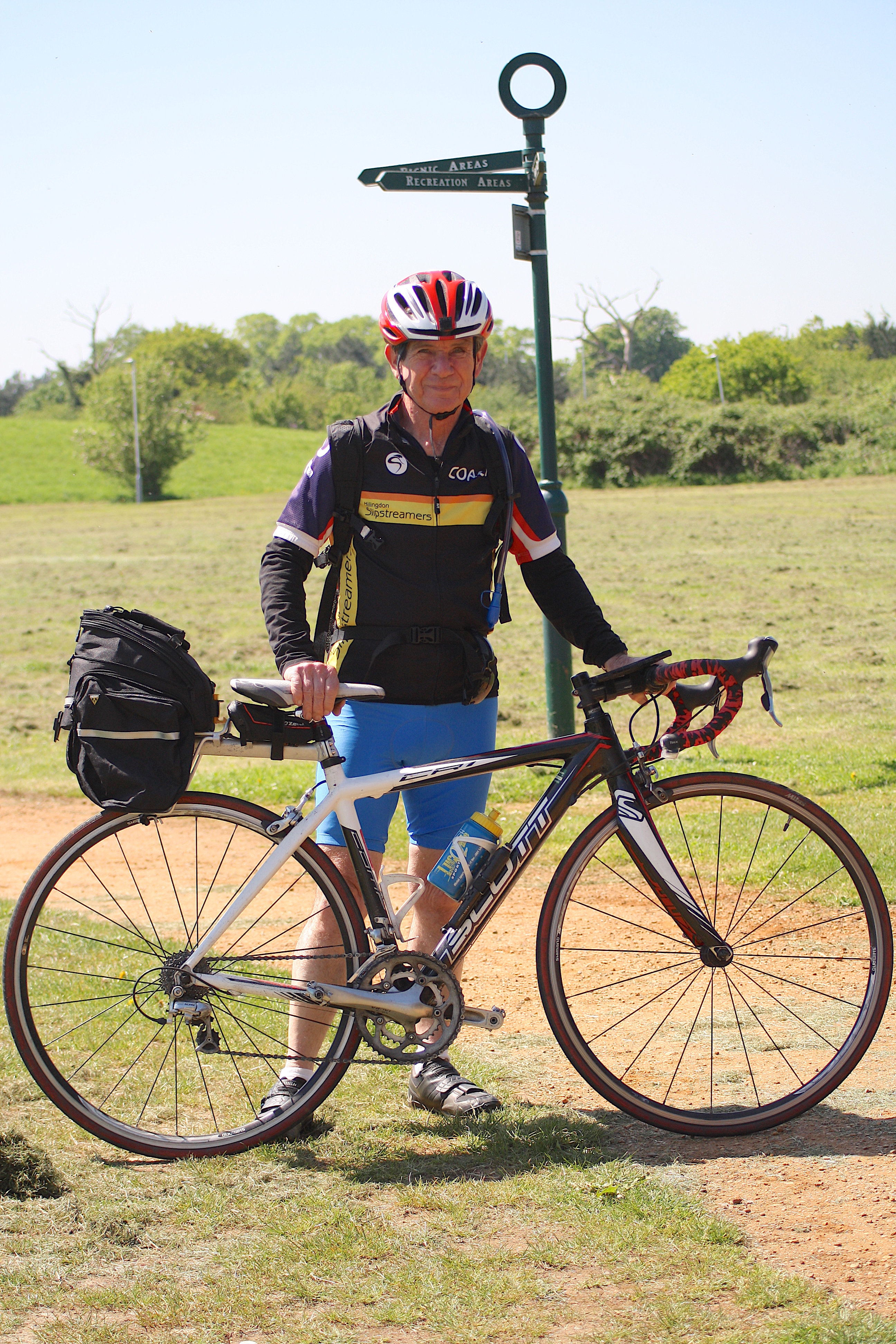 For many of us, when we enter our 70th year on earth, we are well into our retirement and looking to enjoy a bit of undoubtedly much needed r&r after a busy life or work, raising families, travel etc. However, for Volunteer Coach extraordinaire, Duncan Adamson, this is a foreign concept. On his 70th birthday, the 28th May, Duncan has set off on a new adventure with just his bicycle, his backpack and a few essentials – what you see in the above photo is all he is taking with him – en route from Teddington to Argelès-sur-Mer in the south of France. Why? When asked this question, Duncan answered “Why not!” – but also that he is hoping to inspire some of our young members with his journey.

We will be following Duncan on his journey and posting updates via Twitter and Instagram with the hashtag #WhereIsCoachDuncan as he lets us know of his progress, so do be sure to keep an eye out for this! 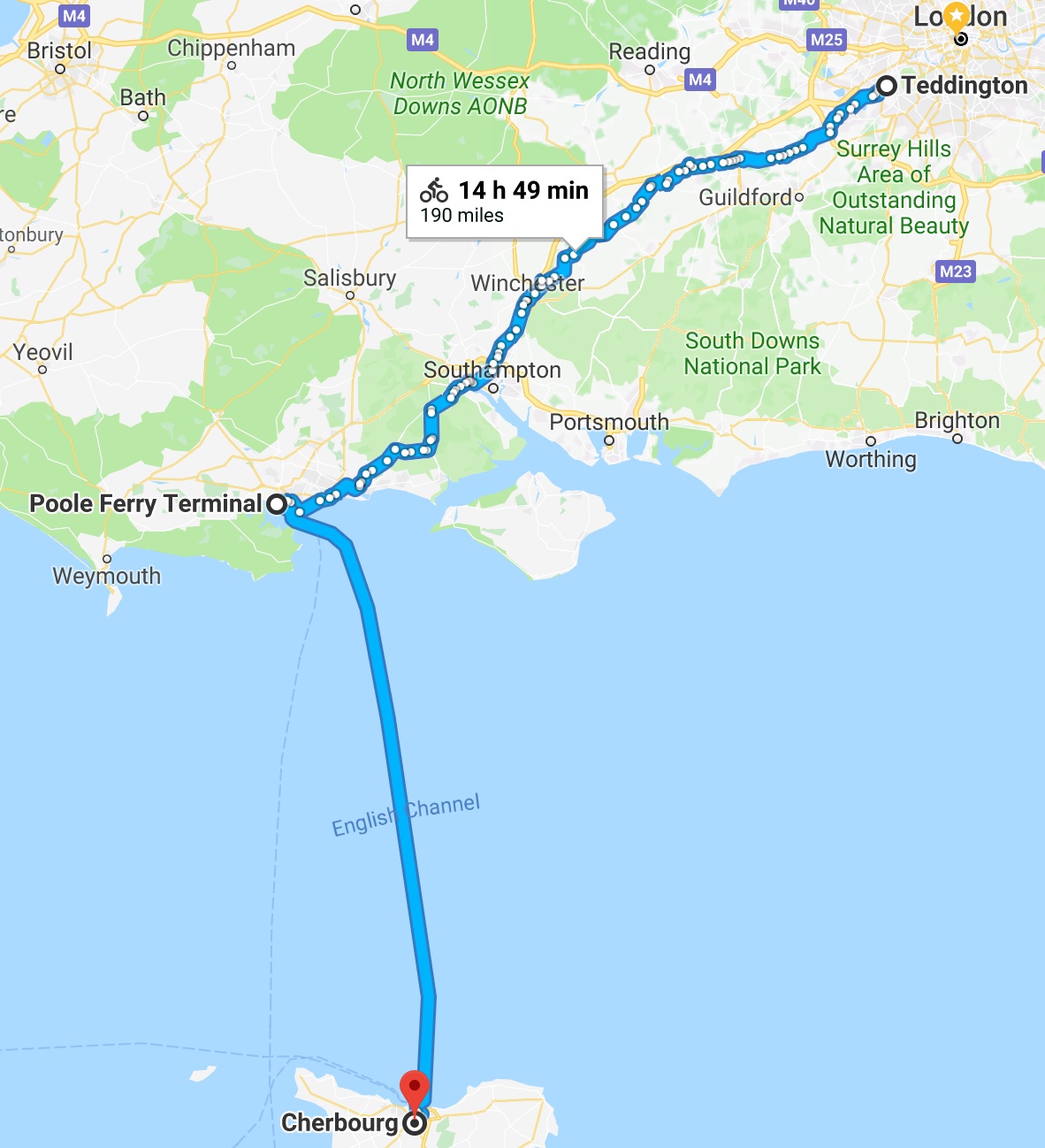 The exact route is yet to be decided but Duncan will most likely be using the most direct route, or slightly to the west through France.

Here are a few words from Duncan before he set off: 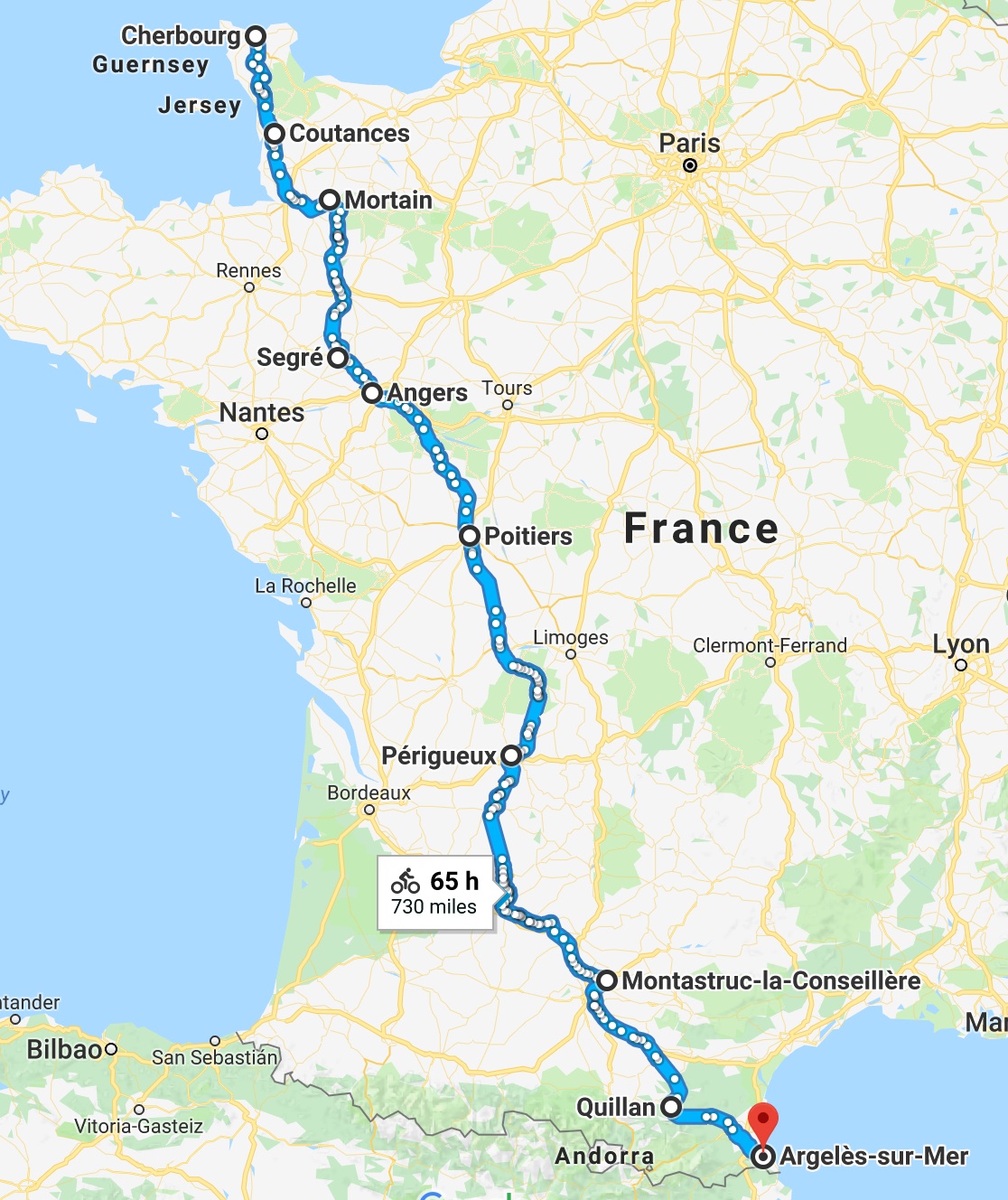 “The last time I cycled over 1000km was in September 1976 at the age of 27, although I have done many overnight cycles since. Prudential 100 – my best – is 5hr 13min. I plan to be on my bike from dawn to dusk. Stopping every 3 to 4 hours to eat drink and restock. This has worked well in the past. If there is a convenient camping site I will use it. But, from prior experience, finding a convenient farmers field usually works best. Bus shelters are to hard to sleep on. I will have a small rucksack with 2L water capacity and for food. A small “Topeak” panier. Minimum clothing, Ground sheet bag that will that will double as a shelter at night. And a bike bag for the train in an emergency. Although, not much chance of that as the trains in France are expected to be on strike during this time. Depending on how the trip goes I will also cycle back part or most of the way.”

When asked about his most interesting cycling/ sporting experience a few years ago, Duncan responded:

“I have had a bike since I was 9 years old. At home during the school holidays I enjoyed cycling around the Hills of Derbyshire. One year, when visiting my father in Derbyshire, I decided to buy a Raleigh Scorpio to cycle to John O’Groats and back. A few days later I was again feeling bored so I decided to cycle to work. Once, I was scheduled to join a cruise ship in Athens. So I packed my tuxedo (yes, tuxedo for the formal nights on-board), tent, sleeping bag, etc. into panniers, and left Derbyshire for Athens. This journey took me on a hovercraft, then through Paris, Frankford, Innsbruck, Dubrovnik, around Albania, into Greece and down to Piraeus. Just under 2000 miles in 18 days. Interestingly, my stamina and fitness did improve over the 18 days: starting with 60 miles a day, I was finally able to easily cycle over 120 miles a day. The other interesting cycle ride was riding alone between Wewak and Aitape in Papua New Guinea, when it was still a dirt track. The ride was more akin to cyclo-cross. When I finally ran out of inner tubes, in the middle of nowhere I stuffed the tyres with palm leaves and continued on riding.”

When Duncan isn’t riding his bicycle or coaching others how to ride, he teaches website design at adult education colleges. His former career is just as adventurous and he has worked in photography on movies like Harry Potter, Love Actually, Kingdom of Heaven, Basic Instinct II and many others. Over half of his adult life he worked in the USA in photography on cruise ships for the first few years. Then he trained as a flight instructor and airline pilot. One of his jobs during this time was training British Airline cadets in Florida, where they came to get their basic flight training and were they soloed in their first aircraft. He also spent five years as a bush pilot in Papua New Guinea with the Catholic Mission in Aitape, W.S.P.

What more is there to say to that other than what an inspiration and we cannot wait to hear all about his adventures on his journey.