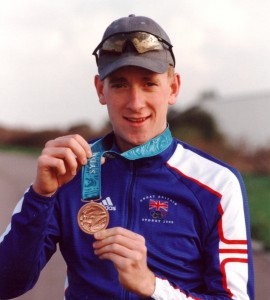 Sir Bradley at Slipstreamers Posing With his Olympic Medal!

Sir Bradley is a professional racing cyclist and a multiple national champion who started his early cycling career as a Slipstreamer. At the time of Bradley’s training, the Hillingdon Cycle Circuit was not quite what it is now, and “Wiggo” was part of the early group of Slipstreamers utilising the then unopened Hayes by-pass – see Club History to read more on this. Sir Bradley is now a multiple Olympic medallist, with a string of various world championship titles to his name, including making history by being the first Briton since 1903 to win the 2012 Tour de France.

Slipstreamers were very privileged to have Sir Bradley visit the club during training, hot off the heels of his Olympic win at the Sydney 2000 Olympics! Not being satisfied with just his presence at the circuit, our members wanted to get to know the man behind the champion, and so Sir Bradley very kindly made the time to answer a series of questions posed to him by our U16’s for our magazine.

Members posing with Sir Bradley and our ex-President Bill Bannister on the left; and Slipstreamers giving Sir Bradley a tour of the circuit on the right!

{Where were you born/ are you from?} Ghent, Belgium
{What do you do for a living?}  Professional Cyclist.
{When did you start cycling?} 1992
{What was your first club?} Archer Road Club, Acton.
{What was your first race} On Hayes bypass.
{What was your greatest cycling achievement/s?} Olympic Bronze Team Pursuit.
{What is your favourite food?} Italian – any pasta.
{And your favourite drink?} Rego milkshake.
{What was the first record you ever bought?} Something techno.
{And your favourite song?} Paul Van Dyke latest CD.
{What were you like at school?} Pain in the bum.
{What kind of books do you read?} Sport autobiographies.
{Do you have a favourite TV programme?} Only Fools and Horses.
{And your favourite film?} Lock Stock and Two Smoking Barrels.
{Which newspaper do you read?} Le Equipe.
{What is your ideal holiday destination?} Perth, Australia.
{How do you relax?} Read and sleep.
{Do you have time for hobbies?} Boxing poster collection.
{What is your greatest fear?} Not wining Gold in four years time.
{How would you describe yourself?} Someone who is fulfilling their destiny.
{What is your favourite training ride?} Benidorm.
{What makes you mad?} Arrogance in the cycling sport.
{What is your most unpleasant characteristic?} Moodiness when I am tired.
{Who would you most like to meet and why?} Mohamed Ali – I almost met him at the Olympics.
{What was your most embarrassing moment?} Very nearly coming off when Holder dropped me at the 2000 Olympics with 5 seconds to go… A few choice words were said.
{Who is your hero} Mohamed Ali.
{Four words to describe yourself?} Look after Number One.